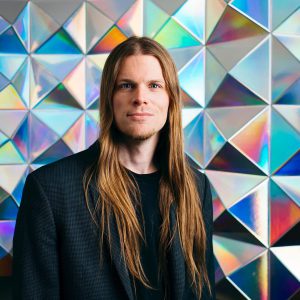 Born in Omaha Nebraska, Phil Hawkins is a multidisciplinary contemporary artist focusing on installation, sculpture, and painting whose work is recognized for its abstract forms that manipulate space.

Upon receiving his B.F.A. in Arts Management from Bellevue University and Associates in graphic design from Metro Community College in Nebraska, Hawkins has continuously worked in Printing, metal casting, fabrication, And refining studios with artist colleagues. Hawkins has also taken part in revitalizing historic abandoned building spaces such as Nebraska’s First National Bank headquarters vault space built in 1917 into a creative art/work studio and venue for the arts. Hawkins’s explorations of architecture in US cities, overseas cities, and Caribbean region have had a major influence on his work.

Hawkins is now based in Los Angeles and his work continues to gain national and international interest and has been included in private and corporate collections throughout the Midwest and the west coast including RIC headquarters and Hy-Vee Nebraska location. Phil’s work has also been published in periodicals including The Reader, Vogue Spain, the Omaha World-Herald, Fox 42 News channel and won several OOEA awards including 2017 Best 3-D artist, Best solo exhibition, and best group show in Omaha, Nebraska.

”I feel art isn’t just a practice, It’s a way of thinking and a way to live.” -Phil Hawkins